One year ago, on the 30th of May, Kcell announced about the official sale commencement of iPhone. Circa 100 tho

One year ago, on the 30th of May, Kcell announced about the official sale commencement of iPhone. Circa 100 tho

For the first year of Kcell official sale of iPhone it was founded out that "iphonomania" prevailed over Astana city. The popular "apple" smartphone was iPhone 5S and the largest sales were realized in Pre-New Year time.

Now the company proposes iPhone 4S, iPhone 5C, iPhone 5S, iPhone 6 and iPhone 6 Plus to its subscribers. From the sale commencement of Apple smartphones in Kcell, share of iPhone 5S sales amounted to 39%, iPhone 6 - 36% and 18% of iPhone 5C.

Sales success of iPhone smartphones is due to the easy choice for buyers and also the opportunity to get unique service package. The smartphone can be bought either for full cost or profitable contract offers for one year, a year and a half or two years. The contract offer implies on that the buyer will get bonus minutes, Internet traffic and SMS each month during the year. Upon that the contract for two year is the most popular one. 38% of kazakhstani people have chosen it. 37% of people prefer to conclude the contract for one year. The package which lasts for a year and a half is convenient to use for 25% of the people.

Astana and Almaty can be regarded as the most "apple-addicted" cities by the result of year sale. 30,1% of sale was realized in the capital and Almaty was the second city of "iphonomania" where the sale amounted to 29,4%.

December of 2014 was the most peak period. It is signified by the Pre-New Year concern and sales commencement of iPhone 6 and iPhone 6 Plus on November with the means of retail channel of Kcell.

It is ought to notice that for the second quarter of 2015 the company has sold more than 61 million iPhone all over the world*. In comparison with other products of the company, the most sell ones are namely the "apple" smartphones which are liked by millions of people, including the kazakhstani people.

* By the result of Apple company for the second quarter of 2015 financial year. 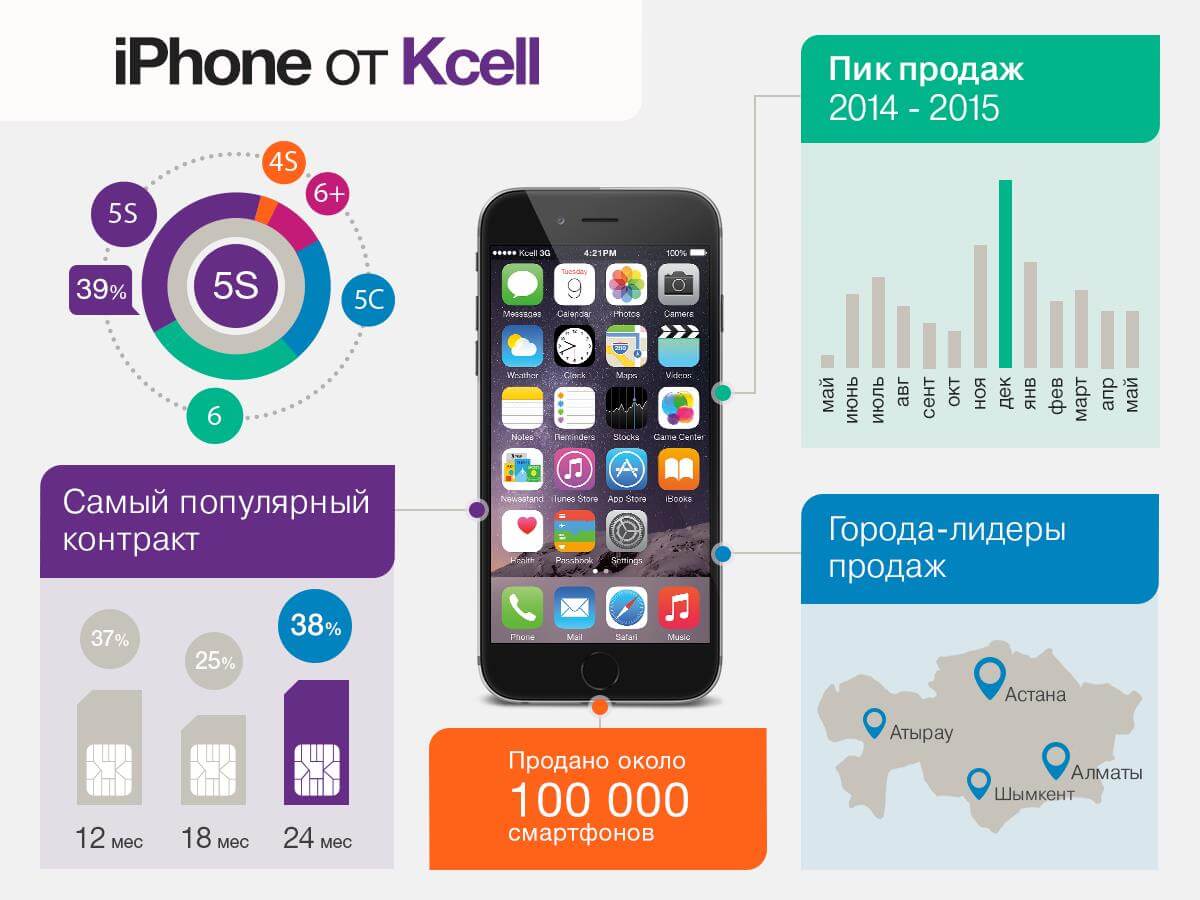